These 2 are our inseparable pair of Angoras; Griffin (tan) and Gypsy (grey) 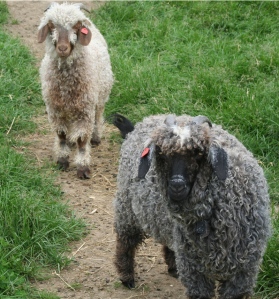 In 2015 Gypsy had her first son who happens to look quite a bit like her. He is now their constant companion. Buster: 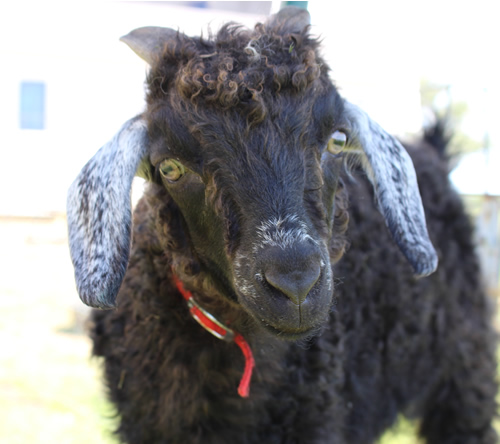 About Angora Goats:
Excerpt taken from Wikipedia:
The Angora goat has been regarded by some as a direct descendant of the Central Asian Markhor (Capra falconeri).[1][2] They have been in the region since around the Paleolithic.[3] Angora goats were depicted on the reverse of the Turkish 50 lira banknotes of 1938-1952.[4]

The first Angora goats were brought to Europe by Charles V, Holy Roman Emperor, about 1554, but, like later imports, were not very successful. Angora goats were first introduced in the United States in 1849 by Dr. James P. Davis. Seven adult goats were a gift from Sultan Abdülmecid I in appreciation for his services and advice on the raising of cotton. More goats were imported over time, until the Civil War destroyed most of the large flocks in the south. Eventually, Angora goats began to thrive in the southwest, particularly in Texas, wherever there are sufficient grasses and shrubs to sustain them. Texas to this day remains the largest mohair producer in the U.S., and third largest in the world.

Angora goats are normally white, but colored Angoras are growing in popularity

The fleece taken from an Angora goat is called Mohair. A single goat produces between four and five kilograms of hair per year. Angoras are shorn twice a year, unlike sheep, which are shorn only once. Angoras, despite their coats, bear no relation to sheep. Turkey, the United States, and South Africa are the top producers of mohair. For a long time, Angora goats were bred for their white coats. In 1998, the Colored Angora Goat Breeders Association was set up to promote breeding of colored Angoras.[5] Now, Angora goats produce white, black (deep black to greys and silver), red (the color fades significantly as the goat gets older), and brownish fibers.

Angora goats are more susceptible to external parasites (ectoparasites) than similar animals, as their coats are denser. They are not prolific breeders, nor are they considered very hardy, being particularly delicate during the first few days of life. Further, Angoras have high nutritional requirements due to their rapid hair growth. A poor-quality diet will curtail mohair development.